The story of how the boat was rescued and transported home is here.

Once home I unloaded the boat and the axle less trailer from the flat bed , supported it with blocks where it sat for a while before I got back to it. I had to get the trailer roadworthy. Registration and Titling was part of that process. Since it didn’t come with a title I have to go through a process. Verification by an inspection station and weighing. Empty. So the boat had to come off. Before that was happening I wanted the weight as low as possible so I removed the engine and outdrive. Pictures here on the before page.

The trailer itself is in good shape. No rust to speak of. All the axle hardware came off easily during the rescue operation. Axles and wheels needed attention. Starting with the wheels. These were “funky”. 4 lug, with a large X shaped opening in the wheels. Turns out these are now labeled “vintage” and are Dexter 4 on 9.44 which means the 4 lugs with the lugs 9.44 inches on center. eTrailer has them, $170 Ouch. Axles are also not cheap so to bring the whole setup into the 21st century would easily get me in 4 figures, plus lights. So I decided to restore what I had. Plus, it was made well back then. At this time I’m stuck at home in the Great Lockdown so I decided to do  the tires myself. Got me a tire mounting tool. Amazon…..

Found a good place to mount it…. the flatbed! 4 bolts and when done I could remove it and store it. The 40 year old tires were not exactly cooperative but with some bad words and some Pine-Sol soap (nice and slippery) they came to see it my way…. 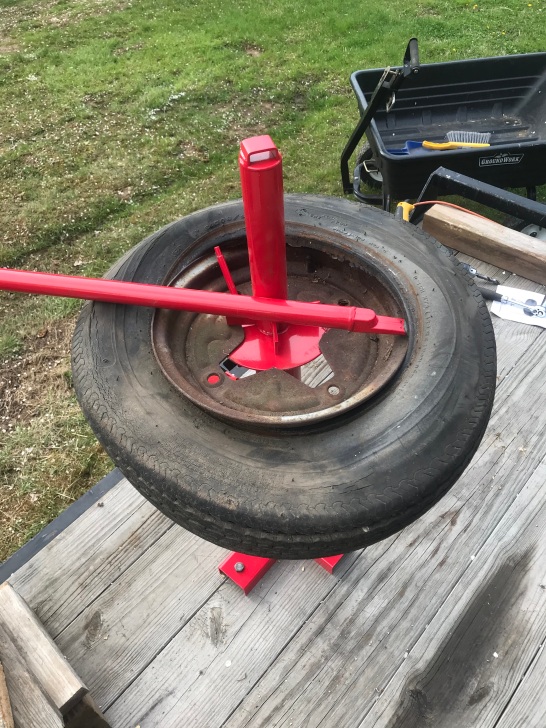 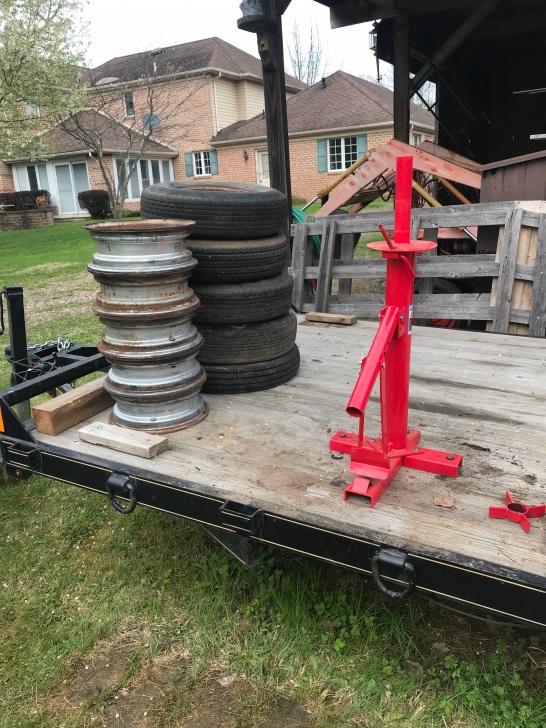 As you can see in the picture, there was a lot of rust on the wheels, which would make a proper sealing of the tubeless tires a problem. After much deliberation I decided to put tubes in. I considered filling and fairing the pitting but there was so much of it, and filler messes with powder coating. (see below). So inner tubes it was. I cleaned the wheels up best I could. This little guy does an amazing job. 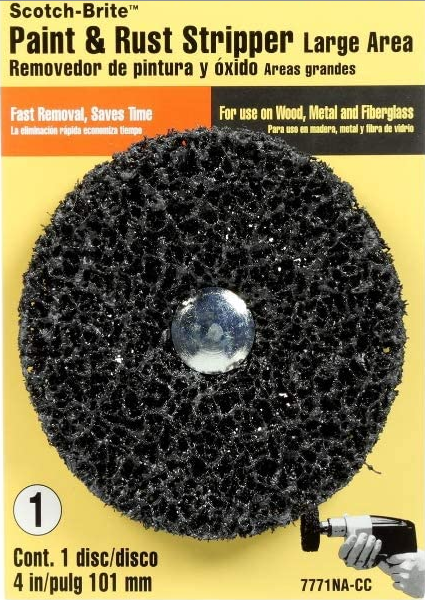 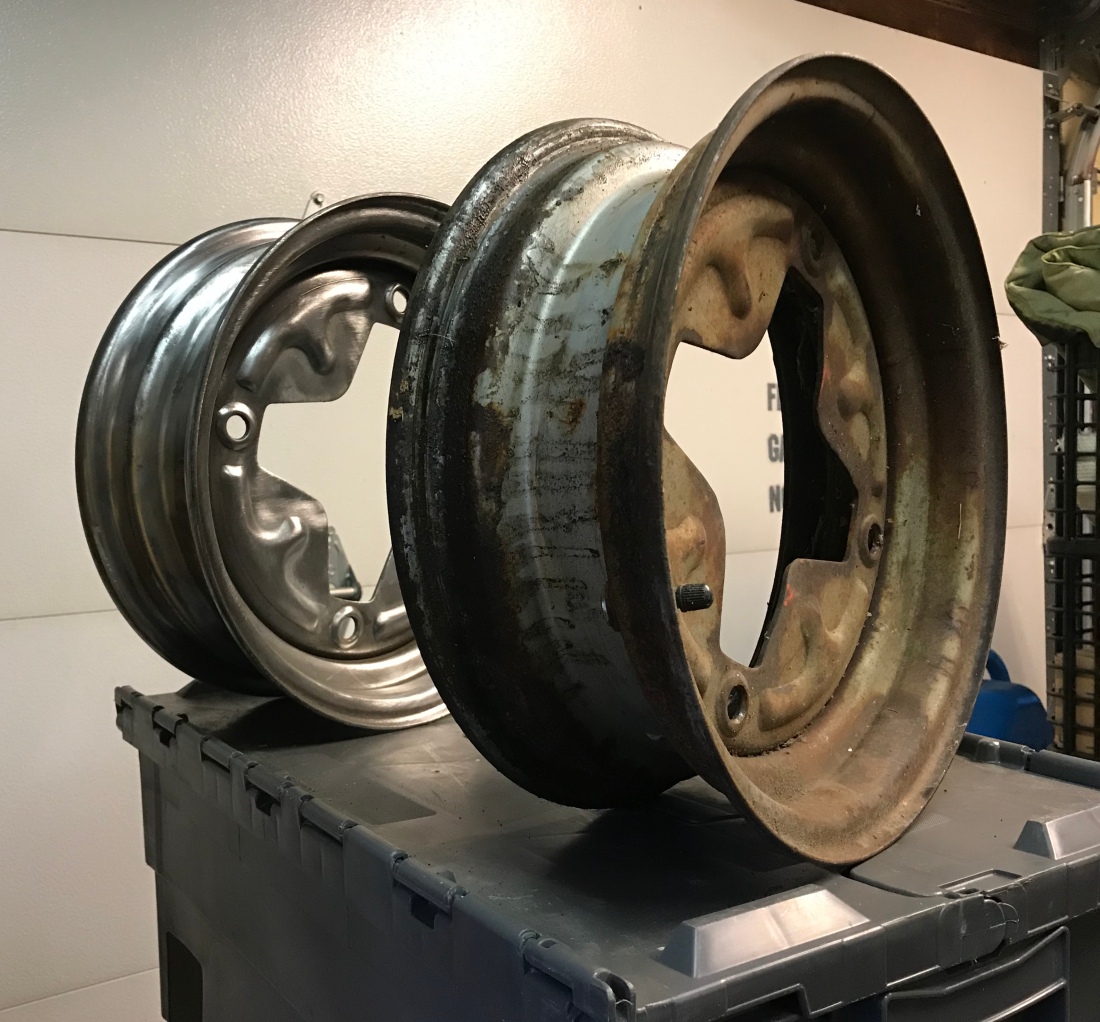 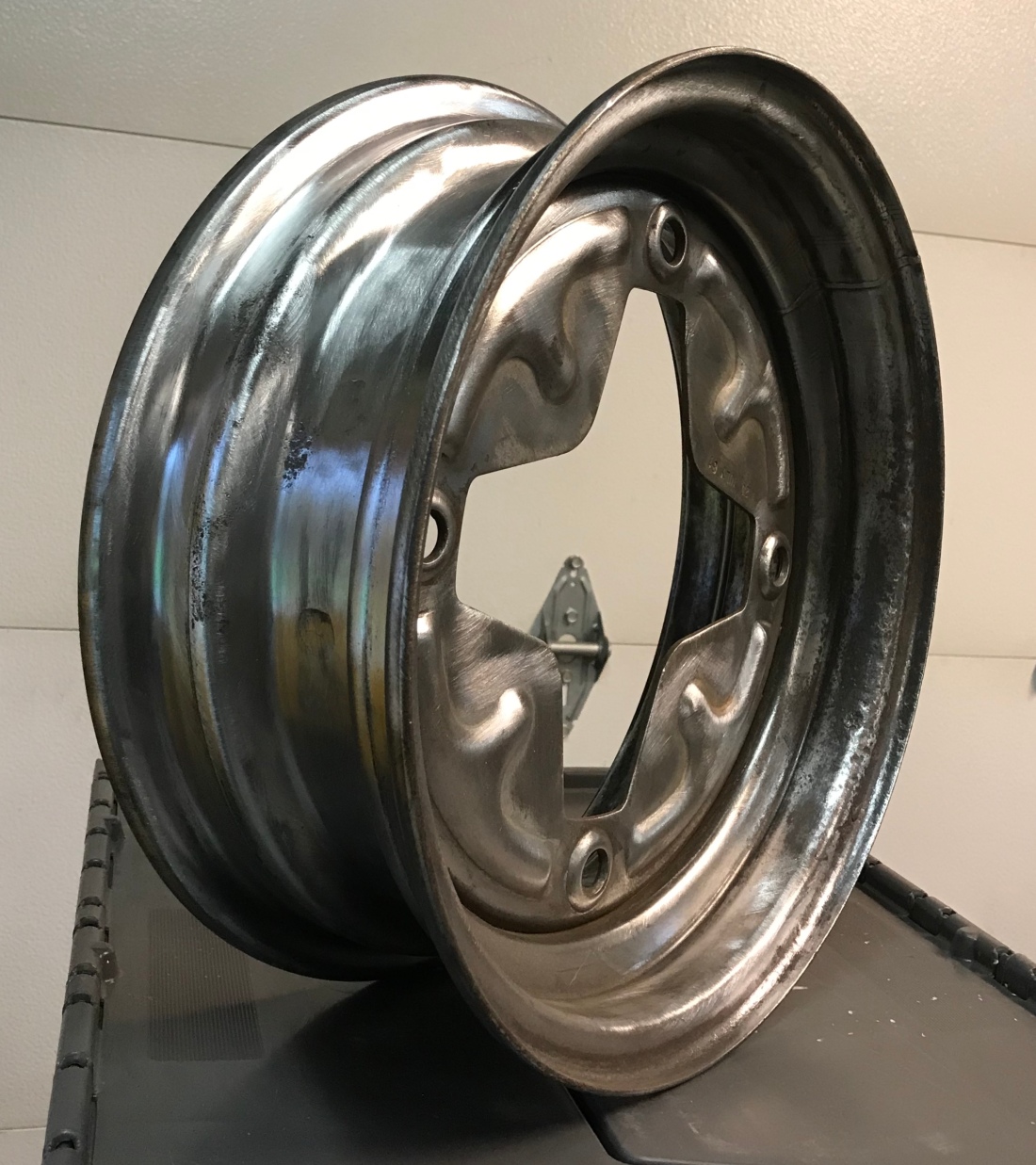 There, that was a lot of work. The drill and grinder are going to be buzzing in my arms for weeks….. 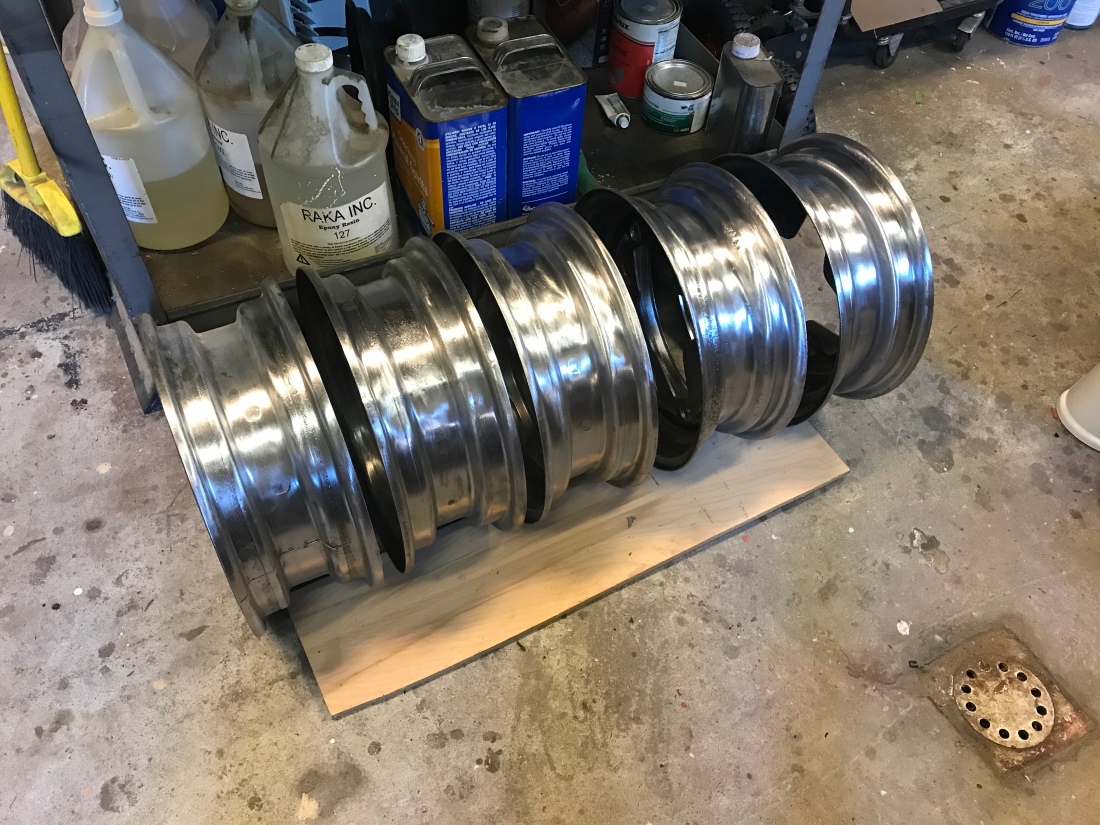 I still wasn’t 100% happy. Some of the pitting was so deep that I wasn’t able to get all the rust out. Since I wanted a properly prepped surface for the powder coating I was looking for a chemical way to get the last out….. Google to the rescue: White Vinegar. So, off to Giant for 5 gallons of same, and in the tub we went. Soaked overnight, one more scrubbing with a wire brush, dry and wipe down with alcohol. Ready for…….

Paint. Which one? Much Googling and reading. Wait, there’s something better: Powder coating. Hmmmm, always wanted to do that. Turns out you need a gun. More Googling. Turns out for a reasonable price many like the Eastwood dual voltage. Thus ordered. ($171.- on sale) And, a couple of pounds of semi gloss powder. 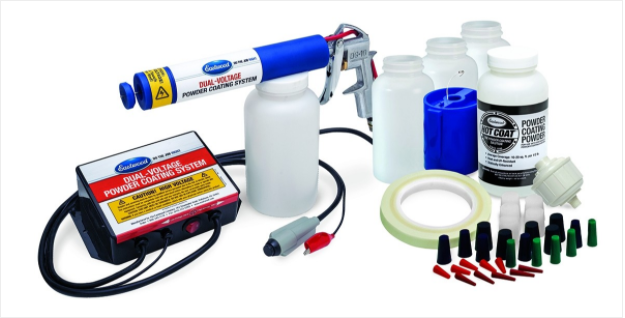 You need to bake this stuff. So…. FB marketplace to the rescue. Picked up a cherry electric oven for $40. Here’s the set up: 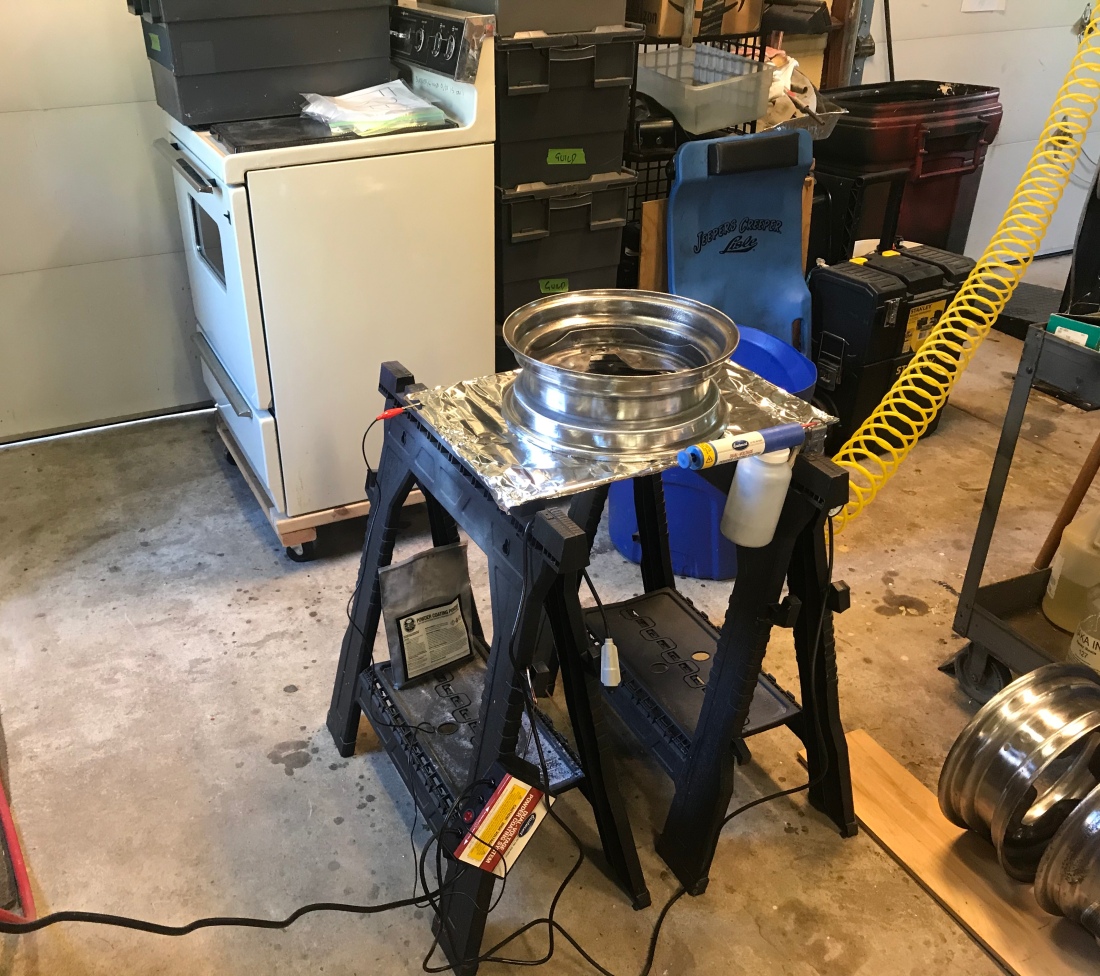 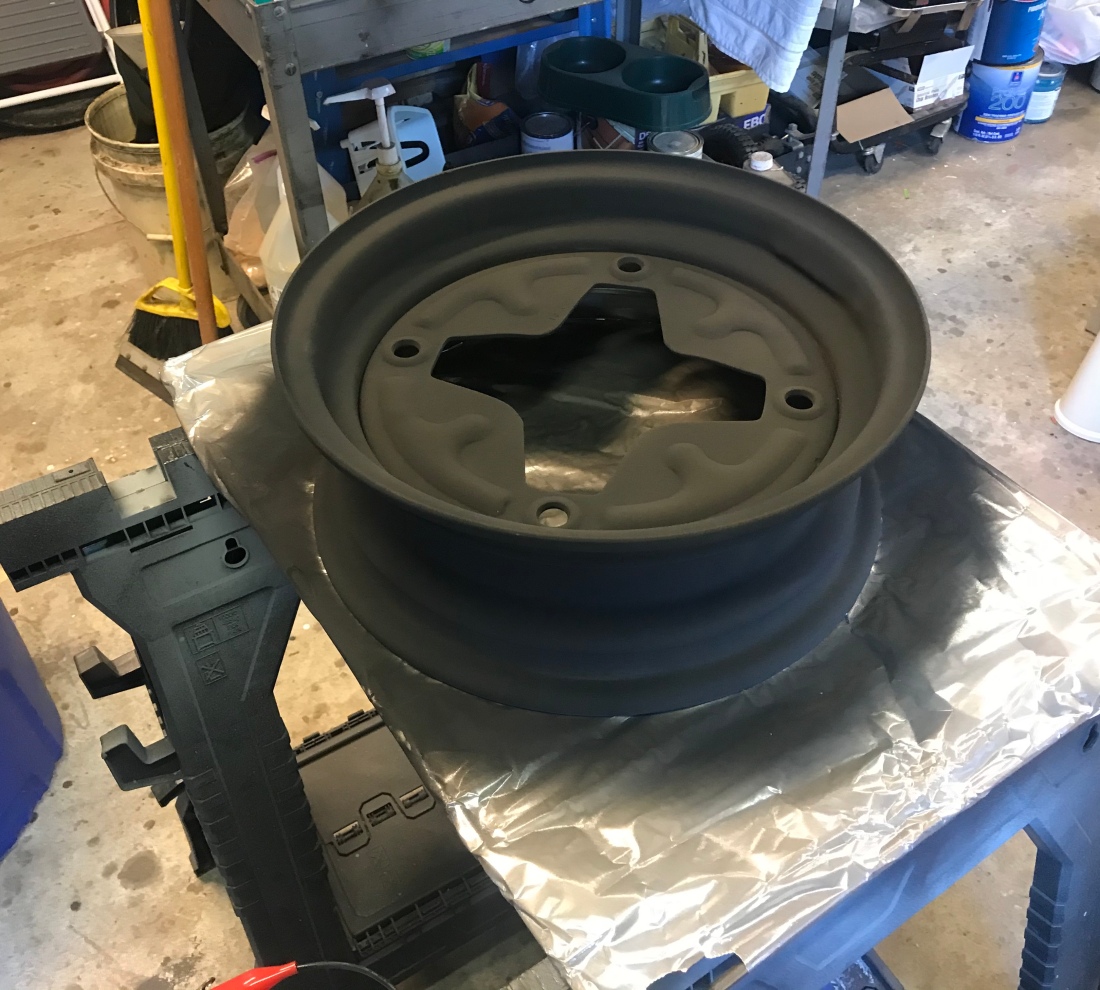 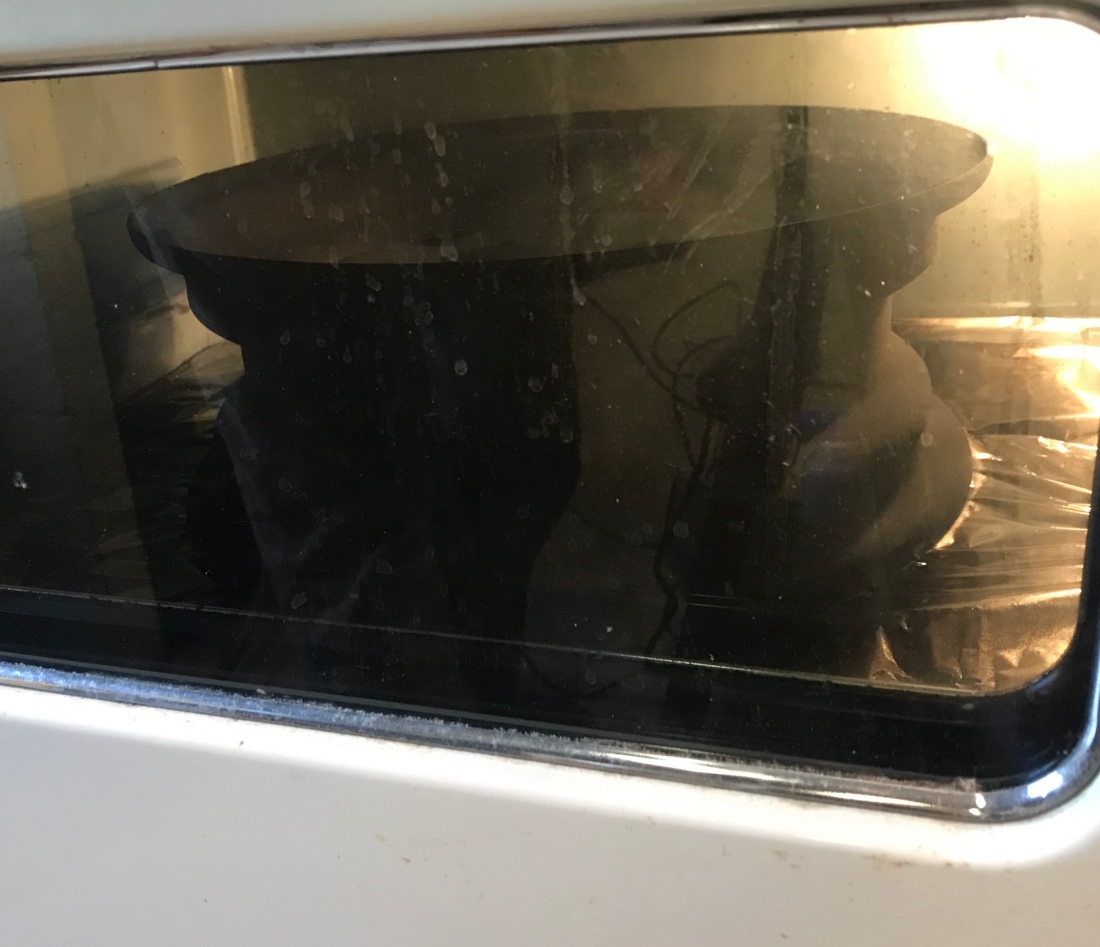 TADA! Very happy with this. 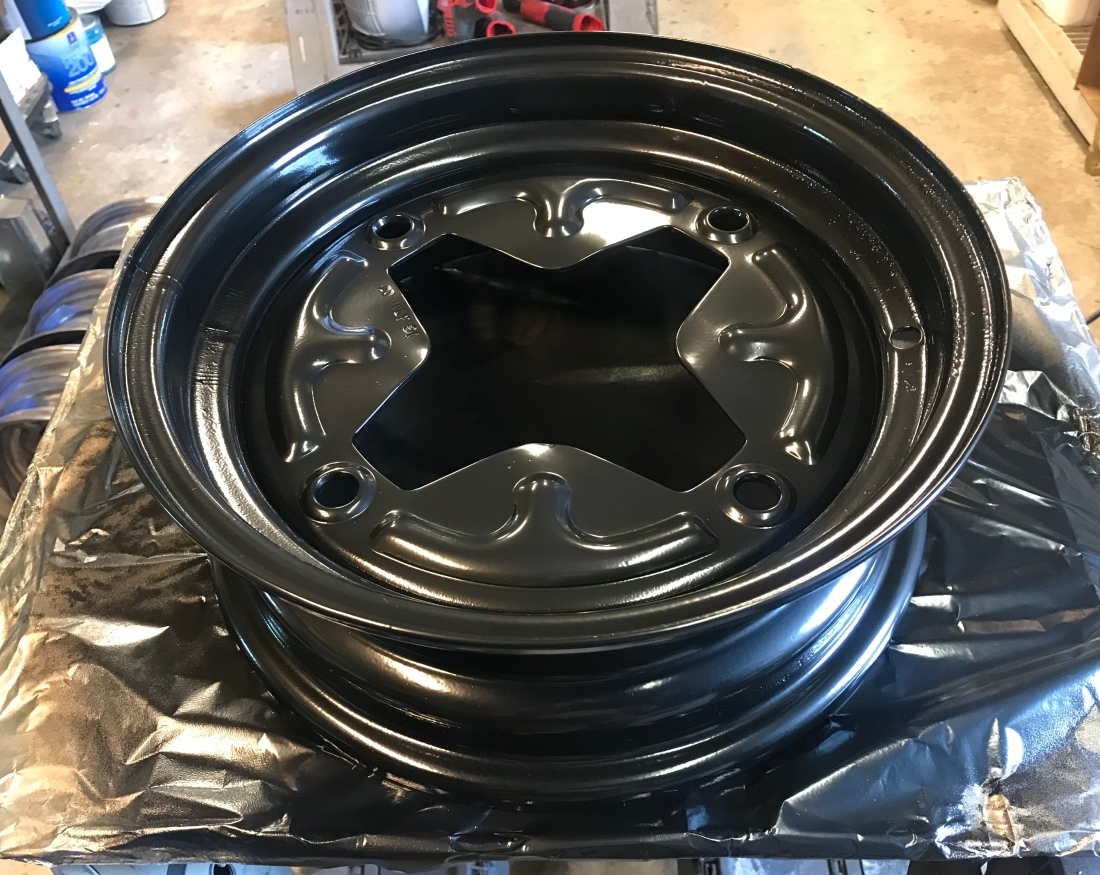 Meanwhile, I took the hubs off the rear axle. This is something I should have done to begin with. The fact that everything on the trailer seemed to be in halfway decent shape lulled me into a false sense of security. Turns out the spindles were shot. And someone had been in there and slapped some new bearings in where they should have done more. A lot more. There was plenty of grease, and relatively fresh which is amazing after 20 years, then again it never rolled far. So little rust to speak of. Still, plenty of evidence of trauma before that. The inner bearing was wobbling visibly, a new seal would last mere miles on the grooved up surface. 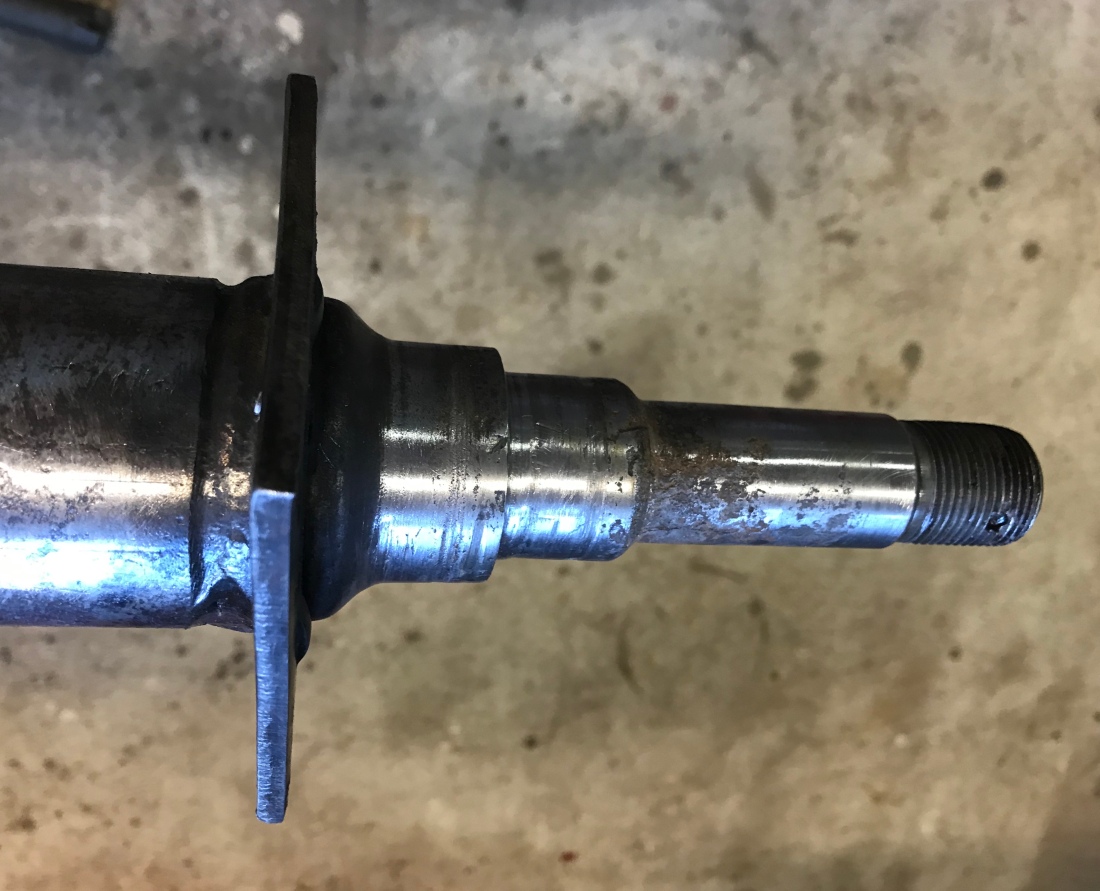 Had I known this I would have probably started from scratch with new modern axles and all that. Again, I should have taken EVERYTHING apart before deciding on a course of action. But, at this point I was too far down the restoration road, and not ready to take a “haircut”. So back to Google, and eventually eTrailer. There is no axle with the dimensions I needed to take the 4 on 9.44 hub. But, there was a new spindle with the right dimensions. Has a 2″ “butt” which would go in the axle. (Axle is actually a regular 2″ schedule 40 steel pipe. ID is 2″) So, Mr Grinder into action:

Turns out the original spindle and brake backing plate (not used) were just butt welded onto the axle. The new spindle went IN. Much better.

Meanwhile I got a break on the front axle. This one has brakes. Although the trailer will be under 3000#, and thus not require brakes in my state, having them never hurts. So since they were there I decided to rebuild them. And, off came the hub: 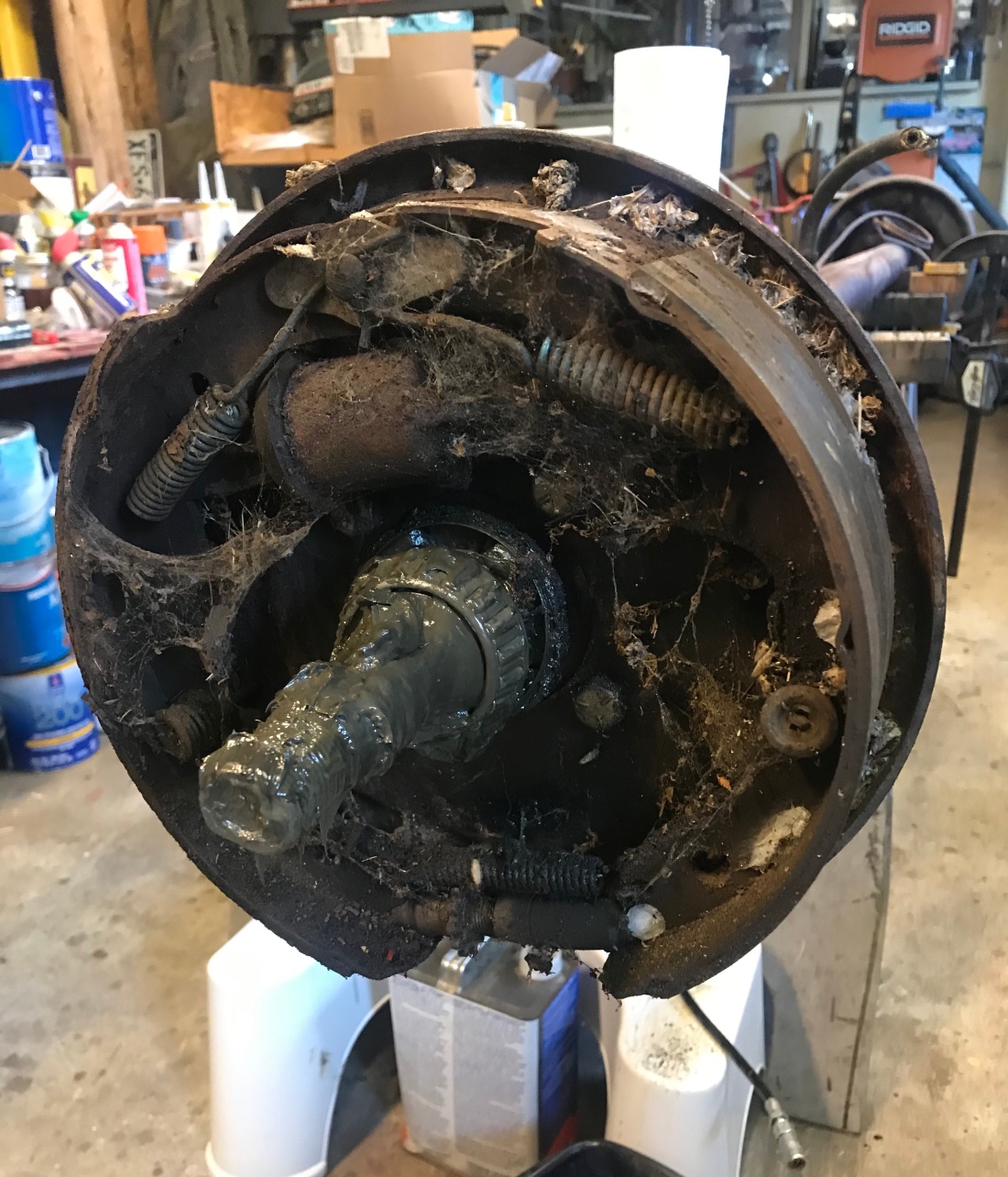 It looks worse than it was. Most importantly, although the bearing surfaces were not perfect, they were “good enough”. Phew. New bearings was enough. Break liners were also in decent shape, and not oil soaked, so I decided to get some miles out of them. The seal surface on the spindle was shot though. In fact the seal had worked its way out of the hub! But, there is a repair for this. They’re called Speedi sleeves or Redi sleeves. Thin, stainless sleeves you tap over the spindle and then they provide a nice smooth surface for the seal to ride on. Most of the kits are $25-$30. I found these for whole lot less. Even ordered a few extra in case I boogered one up. 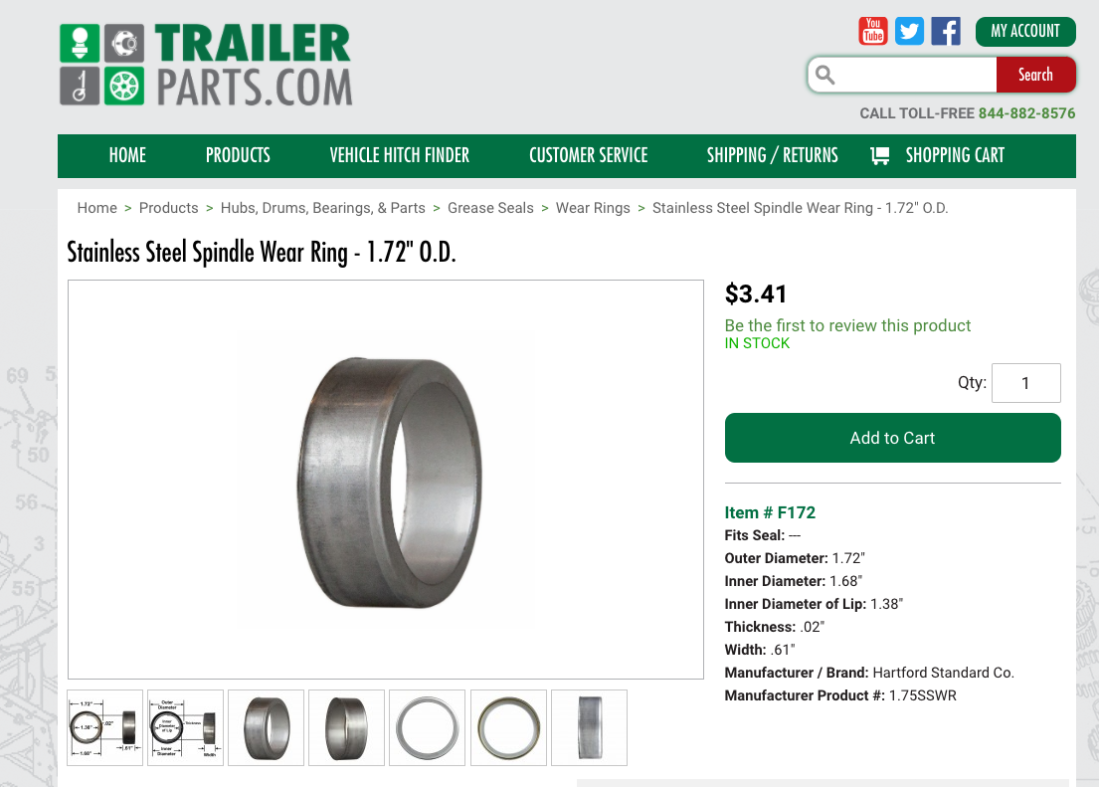 Then there was the wheel cylinder.